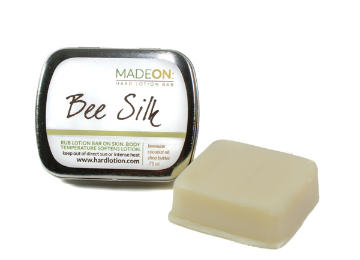 If your child breaks his arm... (Beesilk for the skin)

A customer, Ember, wrote to tell me that one of our products worked really well when her son broke his shoulder the other day.
She writes:
"Last week, my 6yo son broke his humerus badly. Amazingly, no surgery or casting...the docs merely put it in a sling to let time and gravity do their thing.The arm has obviously been very painful, which means he doesn’t move it, which resulted in a nasty, chaffing rash in the folds of his pit."
She was going to treat it with hydrocortisone. I would have suggested  Simply Soothing Rash Cream because the added zinc oxide does wonders on rash... but she did this, which worked out perfectly:
"I thought I should grab hydrocortisone cream for relief, but instead remembered my Bee Silk bar and decided to try that first. Within hours, the rash was improving and by morning was nearly resolved! Only one application and the skin was protected and able to heal on its own. So grateful!!"

This is fantastic! Way to go, Ember!

If you or a child has a skin issue, I would suggest you do what Ember did, and just TRY something all-natural first. You likely have Beesilk in your home - try that! You'd be surprised at the many uses that customers have shared with me, from skin folds to paper cuts, chafing thighs to minor burns. I've even known a seamstress who used Beesilk as a thread waxer. Same with other products... a child complaining of an upset stomach or headache may get some relief from some lavender-infused carrier oil and a back massage before you have to reach for the Tylenol. It's not always a quick-fix to go this route, but it's always worth a try.
Check out Beesilk